About the Claremont Windmill 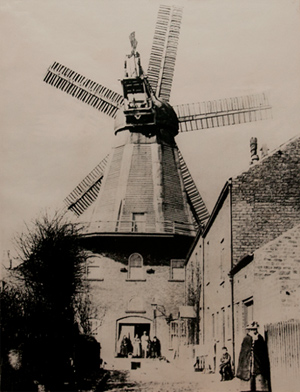 Claremont Controls adopted the iconic image of the grade II listed Chimney Mill as its corporate logo when the company was founded in 1980.  Chimney Mill is located on Claremont Road, Spital Tongues, Newcastle upon Tyne.

Constructed in 1782, Chimney Mill was the first five-sailed smock style windmill to be built in Britain and remains the only surviving example of its kind, in the North East region.  Designed by renowned Civil Engineer John Smeaton, the mill continued in active use until the end of the nineteenth century.

The smock style design comprises of a wooden tapered tower with eight sides, equipped with horizontal boarding on each aspect. The sails are mounted on a rotating cap, designed to turn to face the prevailing wind direction.  The five-sail layout was more efficient than the standard four-sail design, but did require a higher level of maintenance.  On symmetrical four-sail mills, any damage to a panel on one arm can be balanced by similar action on the opposite side.  This is not possible on the asymmetrical five-sail design, which demands all five sails respond equally to the driving wind pressure.

After Chimney Mill was decommissioned, it was used as the club house to a nearby golf course.  The sails were removed in 1924 and the fan tail dismantled some ten year later.  The building was restored in the 1970s.  Claremont Controls operated from the building in the early 1980s.

Over the past 30 years Chimney Mill has been occupied by a number of businesses, including an architect’s practice, graphic design, fashion design and more recently a dental practice. The structure is Grade II listed and fronts directly on to Claremont Road, Newcastle upon Tyne.