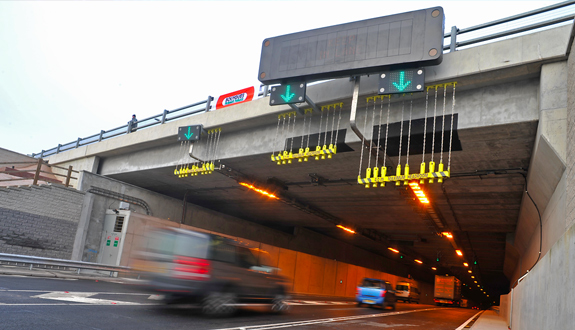 The Tyne Tunnel crossing on the A19 to the east of Newcastle upon Tyne was fully opened to through traffic at the end of November 2011 bringing to an end the lengthy queues that were common at this bottleneck at peak traffic times.

The crossing has involved the construction of a second two-lane tunnel to supplement the original tunnel bore. The new structure was opened earlier in 2011, where upon the original 1969 tunnel was closed for a full refurbishment.  With this refurbishment project completed, both tunnels were opened to traffic two weeks ahead of the planned schedule.

Northern approaches to the tunnel crossing are managed on behalf of the Highways Agency by A-one+, whilst those on the southern approach are managed by Sir Robert McAlpine, both HighStone users.  On the A19 northern side of the Tyne lane realignments have been implemented on the three roundabout interchanges at the Coast Road, Moor Farm/Spine Road and Seaton Burn as it joins the A1 north of Newcastle.

Claremont Controls very much welcomes the completion of this particular project. Although we have no direct connection with the Tyne Tunnel contract, the route is one of only three main crossings of the River Tyne and is particularly convenient for our Ashington offices.  It is the first major increase in capacity to connect Northumberland to the south since the opening of the A1 Western Bypass around Gateshead and Newcastle in 1990.  Both alternatives to the tunnel crossing, the Western Bypass and the Tyne Bridge crossing in the centre of Newcastle, are very busy at rush hour times and you often get caught up with long delays.

The Tyne Tunnels are operated by the UK-based Concession Company called TT2 Ltd (Tyne Tunnels 2) and tolls are levied against vehicles using the crossing.